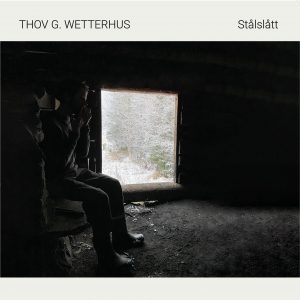 Finally, there is a new record coming out in our series with the pragmatic name “Perspektiv på norsk folkemusikk”. In fact, “solo mouth harp record” was one of the first points on the idea list when our label was founded. Why? The Norwegian mouth harp tradition as today, hosting a number of great instrumentalists, is one of the most immediately transcending musics we have in this country. The mouth harp touches our bodies and let us dream away in an overtone world where gravity acts in pulsating waves.

Thov Gudbrand Wetterhus. Remember this name. The farmer from Nore in Numedal may have not released music on record before, but he is widely known in the Norwegian folk music community in general and particulary in the mouth harp community. We are dealing here with a very musical gentleman, one we can safely call a Master. Wetterhus has a special ability to shape the tunes he plays, and make them his own. The way he does it is very advanced. Many of the tunes he plays are fiddle tunes and he is able to form them close to what a fiddle player would get out of her instrument. The term “iron fiddle” about the mouth harp therefore fits particularly well in this case. With traditional material from several areas, such as Setesdal, Numedal, Telemark and Voss, he is a sought-after player for both dancers and listeners.

The mouth harp is one of the most fundamental musical instruments. It consists of a tongue that is fastened to a frame. The frame is held against the teeth. By hitting the tongue (the term we use for “tune” is “slått”, which literarely means “beat”), the subsequent vibrations in it propagates in the mouth that now functions as a resonant box. One adjusts the mouth to bring out the different harmonics to the fundamental tone in the tongue. With good technique one can then play pure tuned melodies with the most well-articulated rhythmic figures.

This album was recorded in the living room on Wetterhus, the farm where Thov lives and works. Gangarar (walking dances) and Springarar (running dances) come close together, earnest themes are repeated and varied, fix bravura numbers sticks out here and there. Fast tunes, slow tunes, sometimes light and springy (Bjølleslåtten), sometimes as a horror scenario in the darkest shadow valley (Rammeslåtten og Bestelanden). The drive is enormous, so hard is it that one almost falls off the chair. With melody at the top, bordun below and the stomp at the bottom, it sounds big as a an Indian brass band. There is also something poetic about the shaping of the melodies. There is a vulnerability here that suits the instrument. The phrases sound necessary.

Everything is recorded straight in, the recording session did not take much more than an hour. Afterwards, Audun Strype has once again done a great job of getting one of our releases to sound mesmerizing. It’s as if we’re being taken into the ear canals of Wetterhus himseld, we hear everything, and at the same time there is a sense of space that confirms that we are sitting in a log cabin. For us at Motvind Records, we are simply very pleased to have captured this detailed music and immortalized it on LP and CD.

The mouth harp has a powerful sound and the connotations with occultism and shamanism are obvious. The medieval feast element is clearly present in this release. At the same time this is razor-sharp club music. Music that should be played loud. Dancers, listeners, DJs and drivers, this one is for you!

Perspektiv på norsk folkemusikk is a series on Motvind Records that deals with different traditions that is characterised by giving us a feeling that they bring out a soulfulness that sheds light over a certain significance by the essence of Norwegian folk music. The purpose of the series is to give people that want to listen to Norwegian folk music a broad selection of expressions that hopefully will inspire to further listening and reflections. “Stålslått” is the second edition in the series, after Helga Myhr’s debut album “Natten veller seg ut” which came out in the autumn of 2019. With the combination of unique music and elegant design, we hope that these albums will be sought after collector’s items for those who knows that physical format still is the most soothing format.