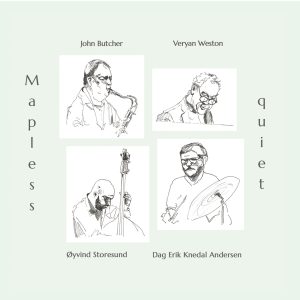 At the very end of the year, we bring you good tidings! A new series is born, wrapped and baptised “plastiskmusikk”. This is Motvind Records’ series for spontaneous music. Plasticity is about being shaped, modeled or bent without breaking. A large part of our favorite musicians are dead serious performers of improvised music and work together in groups to fine-tune musical whims into a common context. Some of them has even made this their life task. That is why we clear our throats and sing our praise to this form of music by starting to release CDs with the very best we can in of recordings by young and old players.

It is easy to get hooked on unpredictability when one has had sifficient good experiences with this music. It is genuinely exploratory in the sense that it starts without any framework other than the players’ own experiences. And the more experiences, the more expressions are driven into the pot. With a sophisticated technique, the potential becomes enormous. The definitions of improvised music are many and different, and Veryan Weston comes up with his own interpretation of the phenomenon in the album notes that accompany the CD release: “We proceed along a musical timeline in the same time as we are all making it up, the musical references being around us both in the past and the present as we share what we are doing in a new situation with others who are doing the same but differently and thus continually modifying our own continuum.»

There is simply so much listening worthy music being improvised these days, both in the rehearsal spaces and in the clubs, that it has become inevitable for us to start our own series for it. There is a unique network of players, organizers and audiences in this field that we would like to help strengthen. This is in many ways traditional music, and one can trace different traditions back to different sources. We hear many young Scandinavian performers play with older players both here at home and on the Continent and it is therefore natural that this becomes a premise for the series. The first edition is a Norwegian-British collaboration. England has been an central hearth for this form of music since the 60’s, and we are therefore humble to present two very experienced players of the British islanders who are still active today.

JOHN BUTCHER has a doctorate in particle physics, but left his career in academia in favor of improvised music in 1982. He has since established himself as a central and defining saxophonist on the European improvisation scene. With an very idiosyncratic style, which combines extreme control over alternative techniques with a tonal and spatial understanding, he has managed to further develop the saxophone both as a sound source, solo and ensemble instrument. He has a wide range of collaborations behind him, including Derek Bailey, The EX, Christian Marclay and Otomo Yoshihide.

Pianist VERYAN WESTON is a legendary musician. He studied composition at Goldsmith’s University in London, and as a composer and performer has made music for a number of films and visual / perfomative art exhibitions. He has done a lot of research on intonation and has a long collaboration with the incredible fiddle player Jon Rose. Others include Trevor Watts, Lol Coxhill and Phil Minton, and he has been a key driver for the London Improvisers Orchestra.

ØYVIND STORESUND is perhaps best known as the bassist for Kaizers Orchestra and Cloroform. Nevertheless, he has always had a foothold in experimental and improvisational music. He is known for his stoic calm and authority in his expression. He was for a long time bassist in the Frode Gjerstad trio, and has collaborated with, among others, Pauline Oliveros, Else Olsen S. and Mike Patton.

Drummer DAG ERIK KNEDAL ANDERSEN has a master’s degree in improvisation from the jazz conservatory in Trondheim and the Norwegian Academy of Music in Oslo. His playing is largely based on interaction, with creative and energetic use of both conventional and alternative techniques. He is dedicated to interplay, and there are few who doubt that he is also the fastest of the improvising drummers out there. He has collaborated with, among others, Maja Ratkje, Alan Wilkinson and Kjetil Møster, and has also recently joined the well-known Norwegian quartet Cortex.

A mere hour of intense concentration music is difficult to sum up with our written language, so we can do nothing but encourage everyone to give this work, stylishly titled “Mapless quiet” time and space to unfold in your ears. We have done it several times, and it grows for every listening session.