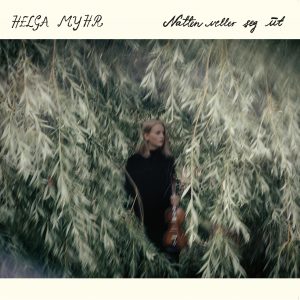 Helga Myhr has for some time distinguished herself by her hard hitting Hardager fiddle playing and
mild voice. Now making her debut as a solo artist with the record Natten veller seg ut, she stands
out with a completely unparalleled, incredible expression that brings both prehistoric, medieval and
modernist music to our minds.

Myhr shows in a mature manner that she has a broad perspective, and chooses to go into several
different traditions. The most apparent is the song tradition from her native valley Hallingdalen.
She has learnt this from her mother Gunnlaug Lien Myhr and this is what most of the repertoar on
the album consists of. The approach to fiddle playing as a means to create abstract soundscapes we
Norwegians can trace back to composer and violinist Ole-Henrik Moe (1966-). To play the fiddle
and sing at the same time is possible to hear on old archive recordings by Eivind Sigurdsson Berg
(1892-1983) from Valle in Setesdal, and has probably been a custom way of expression for
troubadours a long way back. Adding up, this is now Helga Myhr’s own tradition, and it is a huge
privilege for Motvind Records to act as an intermediary between this tradition and the audience.

The album starts with a piece rich in overtones and instantly establishes a mode of patience. All of
the sudden, a psalm raises, Den lyse dag forgangen er, performed in an intricat arrangement with
voice and fiddle. We sit like lit candles, listening. What’s next? A playful, studio edited version of
Du skal ikke døren stenge. Further on, it waves back and forth. Sometimes it’s quite abstract, then it
jumps directly into melodies so strong that it really gives you the chills. And always this patience.
Many of those who have heard Helga Myhr play these songs live, has experienced to feel united
with the universe. That is probably not sensational for the regular Motvind Records listener, but we
cannot take for granted that music has the power to move us in that particular way. Take a long and
good look at the starry sky while listening to Nu rinner frem en deilig sommer and you will know
what we mean.

Side B opens with the original composition Gløymer dag og stund and here she gives a proof that
her dance playing really grooves. And we have to say that improvisations over ancient Norwegian
dance rhythms is an awaited addition to our record collections. O kjære Maria is a hauntingly
beautiful song and we will not forget about the first time we heard it. When the record eventually
closes with a hardcore version of Ingen finner frem til den evige ro it is like time has stood still, and
we just want to turn the record over once more and listen to it again.

But what is it that makes it impossible to just have this record spinning in the background while
we’re working on other things? There’s a seriousness about this music. Many of the texts has a
religious message that isn’t necessarily outdated, althought people don’t really ride their horse to
church on Sundays anymore. Are there problems in the world today? Can philosophising upon
religious themes such as light and darkeness, grace, humility and death, give us insight? Is it still
possible to learn something from characters like Mary and Jesus?

But back to the performer Helga Myhr. Except from track number two, where several takes has
been laid upon each other, this album is recorded completely live. Everyone who has tried to sing
and play the fiddle at the same time, knows that this is a quite difficult task. But apparently not for
Myhr, whom with effortlessly elegance forms the music in a way that makes every attack, every
sploink, and every squeak meaningful logs in a bigger timber construction. It’s true musicality. We
would like to request everyone to give this record the time it deserves!

No fantastic record without fantastic helpers. Tuva Syvertsen, being a vital influencer on both the
broad and the narrow folk music scene, has prodused the record and worked with Myhr for a long
time. If we know the musician Syvertsen right, she has done her part in making this record both
sometimes kick us in the foot, and sometimes stroke us over our heads. Audun Strype has once
again entered a project with all of his knowledge and creativity, and that’s not little, we’re talking
about one of the most experienced producers in the Norwegian record business. Knut Buen, who is
one of the biggest legends in Norwegian music, especially in having the ability to think both
backwards and onwards, has done us the great honour of drawing some beautiful roses that put a
strong mark on the graphic expression of the record.

Perspektiv på norsk folkemusikk is a newly formed series on Motvind Records that deals with
different traditions that is characterised by giving us a feeling that they bring out a soulfulness that
sheds light over a certain significance by the essence of Norwegian folk music. The purpose of the
series is to give people that want to listen to Norwegian folk music a broad selection of expressions
that hopefully will inspire to further listening and reflections. There are already two-three other
records on it’s way, and with the combination of unique music and elegant design, we hope that
these will be sought after collector’s items for those who knows that physical format still is the most
soothing format.

The record is released on vinyl, CD and digitally.